Don’t Close the Door on What Could Be

The other day, a quote came up on my social media feed from Nelson Mandela that goes like this: “It always seems impossible until it’s done.”  The quote made me pause and I realized that this quote, perhaps more than anything else, epitomizes my approach to both teaching and educational activism. 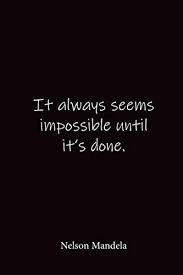 Early on in my teaching career in West Philadelphia, my colleagues and I sat around a table grading ELA benchmark assessments. We were reading their open responses and sinking deeper and deeper into disappointment. Our students weren’t doing well. They weren’t writing clear thesis statements. They weren’t providing context in their writing.  They weren’t citing evidence. They weren’t analyzing. In short, they weren’t succeeding.  These were 11th and 12th graders – and if they couldn’t do this stuff by now, how could they possibly master these skills by the end of the school year?  It seemed impossible; the door to academic achievement seemed closed.

But it wasn’t. We changed our teaching strategies. Instead of just telling our students to remember to include their thesis statements, or to remember to cite evidence, or to analyze text instead of simply summarizing, we actually showed them how.  We shifted our whole approach by drawing on the classic word game Mad-Libs. We deconstructed a body paragraph into the following graphic organizer:

With every text we read, students used this Mad-Lib style formula to construct an effective body paragraph. We used show-calls and pulled student work under the doc cam for students to see the progress being made as well as the progress that was still to be made.

By the next round of benchmark assessments, my colleagues and I sat around the same table, grading the next round of ELA open responses and our jaws dropped.  We saw clear writing that identified themes, analyzed figurative language, and cited evidence in support of original thesis statements. The lesson wasn’t lost on us. Getting our students to be effective writers seemed impossible, until they did it. (For greater detail on this method, click HERE).

Everywhere we look, if we have eyes to see, are partnerships waiting to be forged, partnerships that can transform the seemingly impossible to the easily accomplished.  Below are two examples.

1- Our school in West Philadelphia had within it a cohort of students who were academically strong and possessed with a desire for adventure. These students were ready, willing, and able to bust out of their concrete lifestyles and change the world.  Meanwhile, about 350 miles north, a university in Vermont was desperately seeking to diversify its student body which was, Vermont being Vermont, overwhelmingly White.  There was a partnership to be made here, but for years, we were told it wasn’t possible. Now, nearly 15 years later, dozens of students from West Philadelphia have attended and changed that university for the better, all the while with scholarships covering greater than 90% of the total cost. It was impossible, until we did it.

2- A small school district in Southern New Jersey with a diverse student body had a problem; their teaching staff was nearly entirely White and in order to better serve all students, they needed to diversify their teacher pipeline. Meanwhile, a teacher prep program that certified new teachers in Philadelphia and Camden, and whose teachers were majority teachers of color,  was seeking ways to expand their impact. There was a partnership waiting to be made. Now, the first cohort of teacher residents, all of whom identify as teachers of color, are getting ready to begin their teaching pathway in this Southern New Jersey school district. Diversifying this district’s teacher pipeline had seemed impossible, until we did it.

The point is, as Mandela reminds us, that all steps towards progress, be it in or out of the classroom seem impossible until someone wonders if, perhaps, it might not be so impossible after all. Let us all be that person; that person who refuses to assume the door is closed, and finds a way to open it for all.