“I must encourage the freedom fighters who follow that any approach which fails to address white supremacy and its counterpart, the imputation of Black inferiority, will force you to walk in circles… Unless you want to wind up where you came in, seek strong confrontation to white supremacy at every opportunity and keep the glare on it.” —Barbara Sizemore

Although it is always appropriate to respond to the vile vitriol emitted during the latest white supremacy parade in Charlottesville, it is important to not take our eyes totally off the many instances of white supremacy and institutional racism that have been baked into this society since its inception.

While confederate flags, torches, violence, and angry white men and women, marching to save a statue that symbolizes their love for the historic “greatness” of the overt racism of America makes people appropriately upset, other quieter forms of racism and white privilege too often do not cause people to raise an eyebrow, let alone take to the streets.

With cavernous chasms existing between black and white wages, generational wealth, literacy, high school graduation, college degree attainment, suspensions, imprisonment, and school funding, white supremacy is alive and well in the City of Brotherly Love and across America. Our historic policies prove that the “love” is often only shared amongst the privileged white folks in our country. There are thousands of extremely comfortable people who don’t give a second’s thought about how their “deserved comforts” and privileged entitlements are at the expense of thousands of people of color.

“The Negro is still the poorest American walled in by color and poverty. The law pronounces him equal abstractly, but his conditions of life are still far from equal.” —Dr. Martin Luther King

While many white people who rightfully cringed at the overt racism inherent in the countless state sanctioned extrajudicial murders by police and the increasingly loud trumpeting by white supremacists, these same good white folks aren’t deeply offended by gentrification, deeply segregated housing and schools, or racist school funding policies. The same folks upset by images of confederate flag waving racists quietly (or not so quietly) are willing to use policy to stake a claim that they and their children are worthy of more and better rights than children and people of color.

“White Americans must recognize that justice for black people cannot be achieved without radical changes in the structure of our society. The comfortable, entrenched, the privileged cannot continue to tremble at the prospect of change of the status quo. There is no separate white path to power and fulfillment, short of social disaster, that does not share power with black aspirations for freedom and human dignity.” —Dr. Martin Luther King

As educators, committed to children, we firmly realize that we can never relent. The work to fight for justice and equity is truly a lifelong battle. I long ago realized that my goal was not to eagerly await to see justice, but to ensure that my children and students are better equipped for the arduous journey ahead.

Last year, as the team at my school—along with conscious educators around the country—prepared for school, we wrestled with how to address the ongoing murders and acquittals of murderers in our classrooms and schools.

For the past several years, we’ve returned to school just mere hours after police have terrorized Black communities through racially motivated interactions and public executions: Michael Brown (8/19/2014), Sandra Bland (7/13/2015), Alton Sterling (7/5/2016), and Philando Castile (7/6/2016), among the many other lives lost to police violence.

There are all types of terror that Black communities are faced with but only some of it makes white people, including politicians and policymakers, uncomfortable. There is an image floating around the Internet that depicts the Charlottesville terrorists with a caption saying, “you see bigots, racists, hate mongers, and bullies. I see loan officers, jurors, educators, and co-workers.” 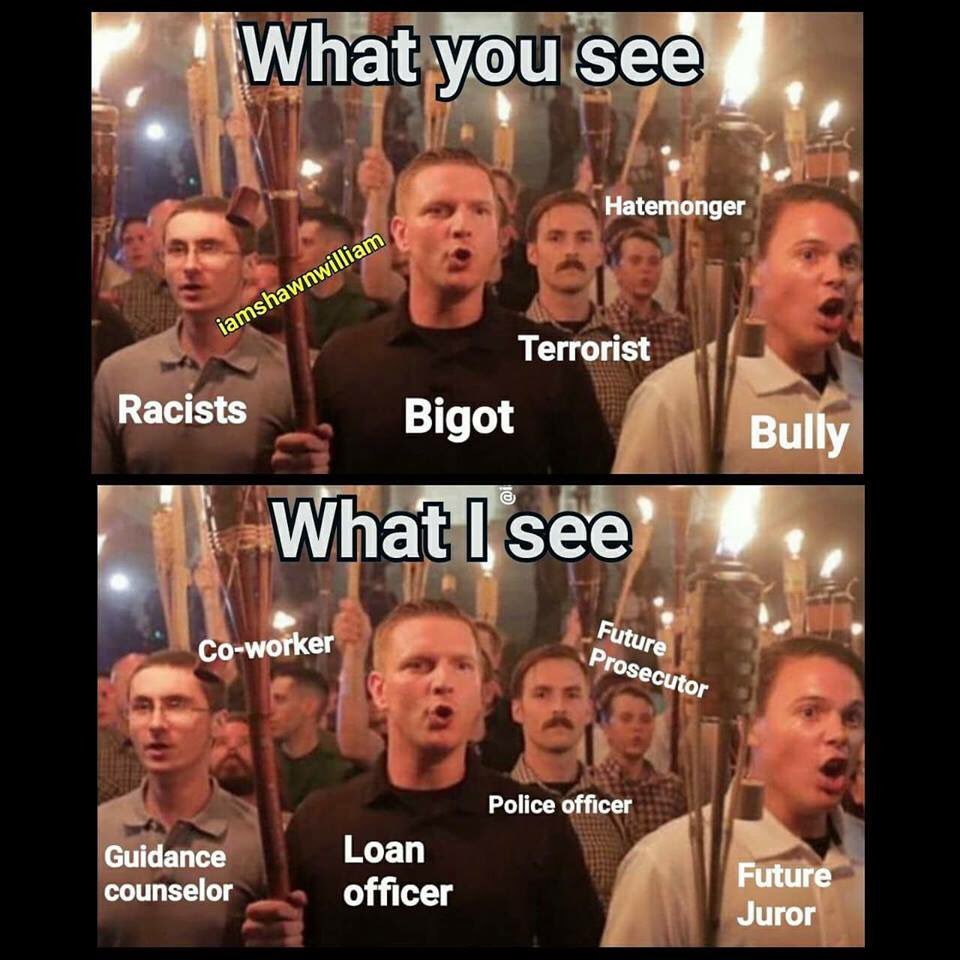 It is a feigned and false righteousness and deep-rooted hypocrisy if the privileged don’t attack all forms of injustice as vigorously as they stood against the overt hatred and racism of the Charlottesville terrorists.

Confederate Vice President Alexander Stephens and many others championed, “the Negro is not equal to the white man…subordination to the superior race—is his natural and normal condition.” How many Southern and Northern policies try to speak Stephens’ belief into existence still?

Until equity becomes the norm in our city and country, people who are consistently committed to this work will continue the fight for equity and justice for all. We know that our work isn’t just tied to singular moments—our work is tied to a pattern and theme of covert and overt domestic terrorism that has always existed in this country’s policies and practices.  In between the inevitable instances of terrorism by people like the Charlottesville terrorists, we will continue to do the work. As social justice teacher, Gerald Dessus, frequently says, “We don’t have a choice.”

Feminista Jones spoke to students at an Ivy League school about the facets of Dr. Martin Luther King’s message that many folks chose to avoid back then (and now). She challenged students to access the vast resources and blueprint that Dr. King provided to address the white supremacy notions that will hold this country’s potential hostage.

In that same spirit, I am sharing some suggestions to white America along with quotes from Dr. Martin Luther King, the revolutionary—not the dreamer that is constantly thrust in front of us.

1. Prepare yourself to engage youth in these conversations and actions. While some will be tempted to ignore the incidents that occur daily, highlighting emboldened white supremacy, others will readily engage in dialogue about overt racism and hatred. Some will severely struggle to name institutional racism and engage students in deeper analysis of its persistent existence. Students must be prepared to confront a hostile America by declaring “eternal hostility to poverty, racism, and militarism.”

Brittany Packnett commented on NPR, “Make covert forms of racism as socially unacceptable as what we saw in #Charlottesville.”

2. Dive into your white privilege, confront the realities that provide comforts for you, yet oppress others. Your very racially-based privilege may undermine your sworn allegiance to equity if it is not being used as a collaborator for justice.

“The majority of white Americans consider themselves sincerely committed to justice for the Negro. They believe that American society is essentially hospitable to fair play and to steady growth toward a middle-class Utopia embodying racial harmony. But unfortunately, this is a fantasy of self-deception and comfortable vanity.”

Basically, y’all owe reparations and y’all gonna have to give up the privileges you enjoy because of your race in order to create the just society you say you desire.

3. Work to remove publicly funded or publicly situated representations of hatred and subjugation of Black people. At the same time, don’t become satisfied with removal of symbols while the very foundations that perpetuate generational poverty, illiteracy, etc. still exist.

Ismael Jimenez, a committed and conscious educator, remarks, “My only fear about all the statues being removed is that white America will do it then claim themselves post-racial without addressing structural/institutional racism.”

Also, don’t assume that the confederate mindset was not and is not prevalent in the North—too often north and south are merely points on a compass, not indicative of varying mindsets.

4. Read and read some more. But, avoid defensiveness while you’re processing it. Education Leaders of Color, Hilary Beard, Abigail Henry, Vivett Dukes, Oakland Unified School District, National Network of State Teachers of the Year (NNSTOY), and many others have used recent incidents, including Charlottesville, to provide people with access to tools that can be instrumental to moving towards action. Take advantage of the perspectives of people of color to improve yourselves and inform your work to dismantle white supremacy and institutional racism.

5. Find organizations that are doing things to disrupt and dismantle. Starting with book clubs and safety pins is okay, I guess. But, that won’t dismantle white supremacy or enact justice. White folks, you’re going to have to assert yourselves. It may take a while for you to go all in, but have that as your end goal and don’t succumb to procrastination. Lives may depend on your assertive actions.

6. Be humble. Recognize that Black resistance to white supremacy doesn’t need to mirror your sudden “wokeness.” Don’t demand Black folks to join you in direct action. Don’t wonder aloud as to why Black folks don’t leap at the chance to be arrested during scheduled and staged direct action. Black and Brown folks have been getting arrested and our mere bold and unapologetic existence is direct action in many ways. Acknowledge the privilege you have in being able to get arrested and maintain your positions, wealth, health, and life. Those aren’t assumptions for people of color.

7. Act with a sense of urgency and don’t hinder those who act.

“Negro’s great stumbling block in his stride toward freedom is…the white moderate, who is more devoted to ‘order’ than to justice…who constantly says: ‘I agree with you in the goal you seek, but I cannot agree with your methods of direct action’; who paternalistically believes he can set the timetable for another man’s freedom…”

8. Recognize that capitalism is a fundamental concept of oppression that is used to limit the potential of humanity. Without acknowledgement of this, “the giant triplets of racism, extreme materialism and militarism are incapable of being conquered.” Our youth must be taught capitalism, not to engage in it, but to recognize it as an insatiable enemy to progress and equity.

9. Stop acting surprised! With every blatant instance of racism or racial bias, an almost simultaneous (and, apparently rehearsed) chorus of “I can’t believe this is happening!” erupts. Please stop. It not only happens, but this racial animosity towards Black and Brown people will continue until you acknowledge it exists and work your asses off to end it.